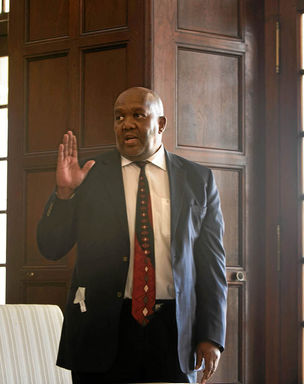 Minister of Co-Operative Governance and Traditional Affairs
2013 Grade: A
2012 Grade: A
More On Lechesa Tsenoli

You have to give Lechesa Tsenoli full marks for bravery. He had been involved in parliamentary oversight of co-operative governance and traditional affairs before he was appointed as its head in July, and he took the job nonetheless. As acts of courage go, that is pretty stupendous.

After only five months in the job, it is too early to rate Tsenoli, especially considering what he inherited. We gave his predecessor Richard Baloyi a generous F last year, and Baloyi hardly covered himself in glory during his last six months in office. Not that he could be expected to have turned around the state of municipalities or provinces in that time.

Tsenoli`s early performance has been mixed, reinforcing the idea that he is dauntless, but also showing that he may be a little too much so.

He could not exactly shrug his shoulders at the R4.2-billion that government departments owe local municipalities, but he could have tried to push some of the responsibility back on to those non-paying departments and embarrass them into action, rather than set himself up as a debt collector with little faith in his ability to collect.

Tsenoli inherited the problem of initiates dying after botched circumcisions, as well as the government`s habit of meddling in the umbrella governance of church groups. But he does seem confident he can enforce a (to date soft) requirement that half of a municipality`s leadership should be women. It is territory that comes with the job, but the enthusiasm with which the new minister charged into both breaches is a little worrying. He is liable to spend himself on intractable issues when hoarding political capital may serve him better in 2014.

If Tsenoli makes it into the post-election Cabinet, he will have plenty to prove himself on. He has the guts for it, but we`ll have to see whether he has the strategy to match.