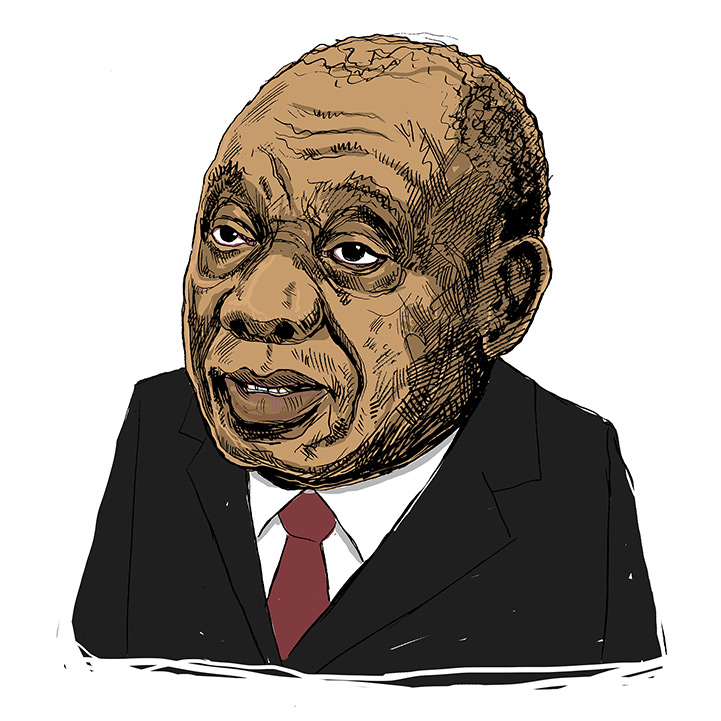 President
2020 Grade: C
2019 Grade: C
Read our coverage on Cyril Ramaphosa
“South Africa is in a state of deep crisis. As the year comes to an end, rolling blackouts returned. Eskom is nowhere near looking like it may be turned around, and the wider systemic risks it represents — the energy crisis, the country’s debt, economic slow-down — get more pronounced by the day. Unemployment has worsened, and when the full numbers for 2019 are in, we may discover that the economy contracted this year.”

So said our report card for Cyril Ramaphosa last year. How little difference a year can make. And how great a difference. Since December 2019, the president has navigated the country through the first wave of the Covid-19 pandemic that could have killed many more thousands of people without his focused control. He has stood at the helm of the African Union. He has also seen, in ANC secretary general Ace Magashule’s refusal to do anything apart from pursue his own self-interest, the unanswered questions of Nasrec threatening to make this a lame duck presidency.

In his February State of the Nation address, Ramaphosa warned: “Our country is facing a stark reality. Our economy has not grown at any meaningful rate for over a decade.” He went on to paint a bleak picture of the poor health of state-owned enterprises (SOEs), adding that “our public finances are under severe pressure”.

He talked up the Jobs Summit, teasings of teeth at the Hawks, and the victorious Springboks.

But, at this point, the country was deep in a recession and would soon be downgraded to junk by the only ratings agency that had not already done so. Eskom continued to provide power inconsistently and break environment laws at the cost of human lives. The other SOEs, destroyed during the era of former president Jacob Zuma, were ready to collapse.

There was very little to cheer about. And, despite his newness to the job, Ramaphosa had been in charge for long enough to pass his own budgets and mould governance.

Ever one to build consensus, Ramaphosa seemed unable to push on. His cabinet contained a mix of tainted and ineffectual ministers. His policy decisions seemed written in old ANC speak, unable to deal with the reality of our world, plastering over any holes with promises of the “fourth industrial revolution” fixing everything through “the youth”. Compromise led the gears of governance to seize up.

In a world used to old, white men making decisions based on science denialism and corrupt advisers, Ramaphosa listened to science. South Africa looked like the ideal setting for the worst of the pandemic, with a poor healthcare system and high comorbidity rates, but the president took a decisive, difficult and brave decision to lock the country down.

This saved lives. On the worst day, in July, nearly 600 people died. More than 22 000 people have now died in total. But, as we have seen in Brazil and the United States, Covid-19 can destroy so many more lives under poor leadership.

In taking point on the lockdown and South Africa’s response, Ramaphosa showed leadership. It is no surprise that people now affectionately call his addresses to the nation “family gatherings”. Crucially, he also spoke to our gender-based violence pandemic during these gatherings.

The effects of Covid-19 whacked the economy, however. An already troubled country had to reach deep in response. And here Ramaphosa’s failure was in his cabinet. The worst tendencies of an authoritarian state came with the police and army threatening civilians while refusing to admit failure when people were killed by these forces. Some ministers ignored lockdown regulations; others seemed simply to vanish.

Ramaphosa’s inability to deal with his own party, and the tripartite alliance, has hamstrung the response. It has meant problematic SOEs have blundered along without a coup de grâce. Unable to stand up for fiscal responsibility, the president has failed the country. This has reached the point at which Denel, a competent and important state entity, will collapse, while SAA, which has been a failure for years thanks to government meddling, is being kept on life support. And the money for that is being stripped from other arms of government.

This speaks to the intrinsic failing of a Ramaphosa presidency. However well he acts as a president, he seems unable to master the internal politics of the ANC. After the party’s national general council meeting early next year, he might lose effective control over it. This country is captive to the battle for who will control the levers of patronage in our governing party.

Perhaps the Hawks will settle this fight for him. Ramaphosa has, after all, shown strong leadership in insisting that our institutions need to be rebuilt and follow due process. That is what you want from the leader of a democratic country, however precarious it makes the future.

As a country, our problem is that so much of our future is vested in Ramaphosa. He is doing a near-impossible job because the alternative is so much worse. How did it come to this?

As a footnote (because that is how it seems Ramaphosa treated it), he has also been president of the AU. You would notice this from his press releases supporting corrupt elections (Tanzania) and his silence on murderous conflict (Ethiopia).