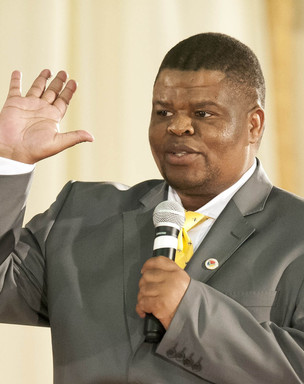 In May, David Mahlobo was whisked from obscurity as head of Mpumalanga’s department of co-operative governance and traditional affairs to assume the powerful position of minister of state security.

Mahlobo’s youth and ignorance of spycraft – he studied biochemistry and worked in the department of water affairs and forestry – makes him an easy target for manipulation by those under him. His lack of a serious constituency in the ANC makes him vulnerable to bullying by President Jacob Zuma and his proxies. Some evidence of this emerged because of the latest purge of the intelligence services in September, when the Mail & Guardian reported that national intelligence co-ordinator Dennis Dlomo, head of the domestic branch (the former National Intelligence Agency) Simon Ntombela and his deputy, Nozuko Bam, were being “redeployed” to the department of international relations.

Ntombela was regarded by outsiders as relatively ineffectual, but close to Zuma; intelligence sources have said he was accused of secretly trying to sabotage Zuma.

Dlomo, who engaged relatively constructively over criticism of the secrecy Bill, never gained acceptance within the professional community, while Bam, it seems, was regarded as a lightweight too close to former minister Siyabonga Cwele and former domestic spying boss Gibson Njenje.

The removal of Cwele was probably forced on Zuma, both by the accumulation of resentment from “the Farm” – State Security Agency headquarters – where Cwele was disliked, and an accumulation of favours that threatened to make Cwele too powerful and too vulnerable.

It did not help Mahlobo’s authority that the decision on the purge appears to have been taken by the ANC’s peace and stability committee.

Meanwhile, more and more questions surround the man who was not purged – Thulani Dlomo – the deputy director for counterintelligence and former head of Special Operations, who now appears to be one of the most powerful men in the agency. Special Operations, which reports to him, has been accused of being deployed to protect Zuma politically and to smear his opponents.

Mahlobo announced an investigation into some of these accusations, but he has referred the matter to the inspector general of intelligence, an institution that appears to lack the will to exercise robust oversight.

Parliamentary oversight is also woefully weak and Mahlobo offered little more than platitudes and the promise of a policy review in his maiden budget speech.