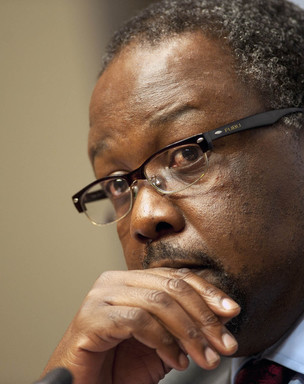 Nathi Nhleko has been in office for seven months and we have yet to hear of any bold, radical strategy about how to tackle crime.

Because he can only set policy – police officers are under the command and control of the national commissioner, Riah Phiyega – he might argue that he is powerless to get rid of his inept principal, one of the few bureaucrats directly appointed by the president.

But without a functional, faction-free police management, his policies will remain just that. He is the political head of a department with a dangerously dysfunctional crime intelligence unit, highly factionalised top leadership and ineffectual investigators who bungle cases.

Unless he overhauls the police service, honest, overworked men and women in blue will remain demoralised and criminals highly motivated.

He needs to stop trying to please everyone and realise he cannot hide behind Phiyega. We will give him the benefit of the doubt, but he should have got it right in the first six months. The effect of crime on the national psyche and the economy are too much to bear.

Analysts see Nhleko as a leader capable of inspiring confidence in the South African Police Service (SAPS) and helping build a culture of engagement with communities, many of whom have been largely alienated from the police. Nhleko has yet say what he thinks should be done with the public protector’s recommendation that President Jacob Zuma pay back a portion of the money spent on upgrades at his private Nkandla home, instead leaving Parliament’s ad-hoc committee to lead the way.

Although it is not clear if this is his way of avoiding possible political pressure, delaying taking action any longer will mark him as indecisive.

He must be applauded, however, for establishing a reference group to probe the numerous issues that are negatively affecting the performance of the police, including allegations that Phiyega alerted Western Cape provincial police commissioner Arno Lamoer about a probe into his alleged links with drug lords and the suspension of senior managers for long periods, among others.

But Nhleko is saying little on the seemingly untouchable KwaZulu-Natal provincial police commissioner Mmamonnye Ngobeni, whose husband’s party was allegedly funded by businessperson Thoshan Panday, who was once investigated for allegedly defrauding the SAPS of more than R10-million by inflating accommodation costs ahead of the 2010 Fifa World Cup.