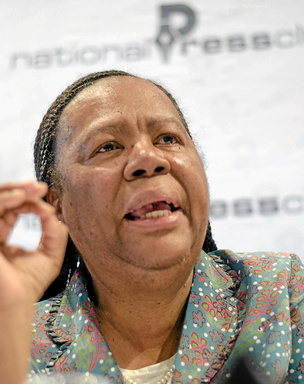 Minister of Science and Technology
2014 Grade: B
2013 Grade: A
More On Naledi Pandor

When Naledi Pandor returned to the helm of the science and technology ministry after the 2014 general election, the mostly technocratic department and its affiliated agencies breathed a sigh of relief.

Pandor – who was instrumental in South Africa’s successful bid to host the world’s largest radio telescope, the Square Kilometre Array – knows the ropes in the largely under-reported, but smoothly operational department.

Pandor refers to herself as the “new old minister” of science and technology, but even though she aspires to being a “new broom” in her old ministry, this institutional knowledge works in her favour.

The department of science and technology’s unqualified audit and the fact that it spent 98% of its increasing budget – R6.47-billion for 2014-2015 – point to a competent and active leadership.

Although Pandor has political clout and is a high-ranking ANC member, she oversees a relatively small portfolio that is at the whim of other, larger, departments: basic education determines the quality of graduates entering the science system, higher education is ultimately responsible for graduates and trade and industry controls industrial efforts and commercialisation.

In addition, pilot projects started and overseen by the department eventually have to be handed over to environmental affairs, water affairs or agriculture.

All of these departments have more pressing concerns, such as the delivery of basic services, than science, technology and research. Pandor and her department are trying, nonetheless, to promote science and technology as a way to address these problems, pushing South African research at home, in Cabinet and abroad.

Pandor is an active minister who is seen as a major driver in raising the profile of science in the country. She has taken steps to institute some of the recommendations of the 2012 ministerial review into the science, technology and innovation landscape, a review that she instituted but saw little implementation of during her absence.

Through measures such as the rejigging of the National Advisory Council on Innovation, which will allow this body access to the minister and Cabinet, she is elbowing space for her portfolio in the national agenda.

But many of the ministerial review’s other recommendations – such as making teaching an essential service – will continue to sit on the to-do list, too politically hot to touch.