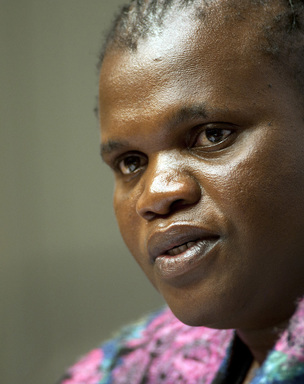 Faith Muthambi is probably the worst minister and the first, if not the only, to be tacitly demoted barely months after assuming office.The Mail & Guardian revealed that the scandal-prone Zuma administration wanted a ministry of propaganda, euphemistically named “communications”, to spruce up its image.Insiders say the Government Communication and Information System (GCIS), an outfit formed by the Mandela government to handle government propaganda, performs better than her ministry.Muthambi has refused in-depth interviews with journalists and the few occasions on which she granted sound bites were disastrous. She either broke down tearfully, or simply froze. This is despite high-level training offered to her by a top television network.Realising his appointment blunder, President Jacob Zuma assigned communications functions to Minister of the Presidency Jeff Radebe, who has in effect become the government’s spokesperson. Insiders in the presidency say Zuma regrets the appointment and is too embarrassed to reshuffle for the sixth time in his tenure as president.Another calamitous irony: Muthambi’s department was the first to become entangled in bad publicity before the president could issue a proclamation to establish it officially. She gave the thumbs up to the appointment of SABC chief operating officer Hlaudi Motsoeneng, despite a scathing public protector report and a public outcry, and against the wishes of her party bosses.ANC secretary general Gwede Mantashe and Minister of Small Business Development Lindiwe Zulu publicly rebuked her and slammed her misjudgment.Motsoeneng lied about his qualifications and his superior, SABC board chairperson Ellen Tshabalala, failed to produce hers and has resigned.Muthambi subtly approved these key people in charge of the public broadcaster. After running without a director general for months, she appointed a junior GCIS staffer, Donald Liphoko, and overlooked acting chief executive Phumla Williams. She plucked controversial former government spokesperson Jimmy Manyi out of obscurity to assist her.Industry insiders say there is an interregnum and a state of policy paralysis, with the Independent Communications Authority of South Africa (the regulator for the communications sector) and the contentious digital migration policy wobbling in the zero-gravity vacuum.Muthambi must not wait for a Cabinet reshuffle but should conscientiously concede and resign.