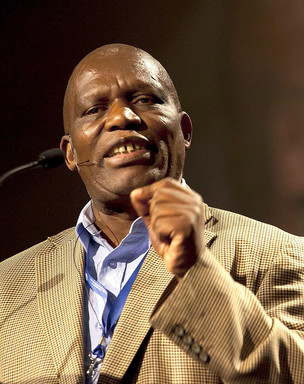 Former trade unionist Senzeni Zokwana is regarded as an affable man who has gone out of his way to get a sense of his new terrain, meeting as many stakeholders as he can.

But concerns remain about Zokwana’s decision to appoint a political adviser rather than one who is technically versed. This has drawn criticism because a similar approach was adopted by his predecessor, Tina Joemat-Pettersson.

Although he is still familiarising himself with the sector, an early cause for optimism is his cultivation of a good relationship with the department’s director general, Edith Vries. Joemat-Pettersson had seven directors general during her five-year term and was viewed as having an adversarial relationship with her staff, which led to high staff turnover.

He has made a commitment to improving the department’s internal auditing, which was labelled as unreliable in the last auditor general’s report.

Zokwana failed to deliver his annual report to Parliament and has been absent at several portfolio committee meetings, including one dealing with the critical issue of animal health.

Zokwana presides over a department perceived to be inaccessible to small-scale farmers. Many associations have pointed out that the “one home, one garden” project has failed and only had officials distributing seeds to individual households with no further technical assistance. The department has so far failed communities at the front-line of the already damaging effects of climate change.

In further bad news for the agriculture sector, Zokwana is perceived to have downplayed the unavailability of vaccines for various diseases and the slow pace of vaccine roll-out, in a sector that is still regrouping following a three-year export ban after losing its foot and mouth disease-free status in 2011.

The state is recapitalising Onderstepoort Biological Products (OBP), the state-owned supplier of biological products, including vaccines, and revamping its infrastructure. This contributed to interruptions in the supply of a number of vaccines.

In early November, several members of the National Animal Health Forum wrote to demand that Zokwana investigate OBP’s capacity and competence to manufacture vaccines, saying it was not the first time there had been vaccine distribution problems.

It is odd that the minister has not emphasised the economic transformation of the department, considering his background in mining, where issues of transformation are high on the agenda.

The minister has done little to address the plight of forestry communities facing insecure tenure and unemployment since the increase in privatisation of the sector. The state has leased these estates to private forestry operations with no capacity-building programmes in place to develop poor communities.

Zokwana has yet to demonstrate that he can take a progressive stance on issues such as the tightening of labelling laws for genetically modified organisms and the monopolisation of the seed economy by powerful multinationals.