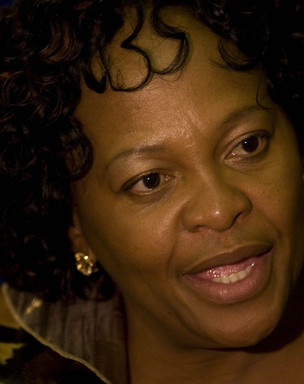 Minister of Water and Sanitation
2014 Grade: D
2013 Grade: A
More On Nomvula Mokonyane

Nomvula Mokonyane has been handed a lemon.

Although incredible strides have been made in bringing water infrastructure to an estimated 95% of the population, this does not mean the taps have water.

Corruption has meant poor-quality workmanship and a third of the population – about 16-million people – do not have functioning water and sanitation systems.

Furthermore, a lack of investment in dams and municipal infrastructure is resulting in water shortages and leaks.

Water affairs is in a mess: the auditor general continually berates the department about misappropriated funds. Political battles and allegations of corruption have seen a merry-go-round among directors general. An estimated R700-billion is needed for infrastructure and the government can only raise half of this.

Although water has its problems, sanitation is in deeper trouble. It has been passed between departments each time there is a Cabinet reshuffle. Nobody seems to know where it belongs. This has the effect of disjointed delivery and policy.

Skills have vanished. People are still using bucket toilets. Corruption is crippling delivery. But moving this competency back to water is a positive step.

Mokonyane’s department is critical: many people are incredibly angry about the government’s failure to provide them with constitutionally guaranteed basic services. South Africa is in danger of reversing its progress on the Millennium Development Goals in these two sectors.

But Mokonyane has the advantage of having dealt with these issues on a large scale as premier of Gauteng. There were problems there, but the province delivered better than the majority of its peers.

She began her term with great energy and immediately held large-scale water and sanitation stakeholder meetings. Although crisis is the norm in South Africa’s water sector, Mokonyane was faced with failures in Bloemhof and Gauteng soon after assuming ministerial office. In both cases she took charge, shifting funds and skills to alleviate the situation.

But her biggest problem is that local government is the implementing agent of much of the country’s water and sanitation provision. As such, her job is heavily dependent on whether or not Pravin Gordhan can fix the co-operative governance department.

Her priority has to be to fix her own department and get sanitation working again. It is too early to judge her progress in this gargantuan task, but she is making the right noises.