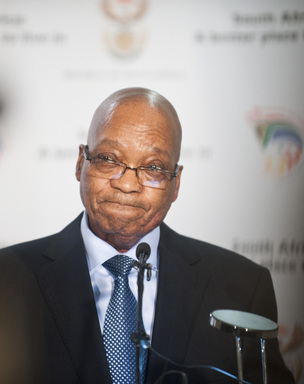 President Jacob Zuma is a divisive figure even within his own party. Between his personal troubles (the provenance of upgrades to his palatial home in Nkandla, the sources of his family’s growing wealth, his battle to stay out of court on corruption charges, concerns about his health) and the political flak thrown up by a revitalised opposition, his actual job performance can be difficult to measure.

Especially for a newspaper that alternates between reporting on matters such as Zuma’s apparent personal involvement in negotiating a suspect nuclear deal with Russia, and challenging him before every court in the land to get our hands on the Khampepe report on Zimbabwe’s long-past elections.

It is lucky, then, that Zuma’s job performance is much easier to measure than that of his Cabinet. A Cabinet minister’s job is whatever the president says it is. Their duties can be vague, their mandates changeable and their responsibilities highly complex.

For the president, however, the Constitution gives a very clear and very succinct job description, which comes down to just three tasks: be the head of state; “uphold, defend and respect the Constitution”; and promote national unity plus whatever “will advance the republic”.

Zuma is undeniably the head of state. When there is an oversized ribbon to be cut or an international delegation to lead, he is the go-to man. For better or for worse, he is the face of South Africa, and if he could be criticised for anything it would be for not causing a bit of confusion about who is running the country by, say, delegating more authority to Deputy President Cyril Ramaphosa. It is in the rest of that job description that the trouble lies with his performance.

Even in the most charitable interpretation, South Africa is as divided a nation at the end of 2014 as it was at the beginning of the year; different classes and races remain suspicious of one another, and we have made no progress in addressing the nasty undercurrent of xenophobia that pervades our society.

We lack a single vision on how to address our challenges. Zuma tried to promote the National Development Plan, which would be a nice double whammy and would count towards unity and advancement, but he failed in that promotion this year, even within his ruling alliance.

In 2014 Zuma made further progress in integrating South Africa within the Brics bloc (Brazil, Russia, India, China and South Africa) and paved the way for South African business in many parts of sub-Saharan Africa, but these strides come nowhere near to offsetting his domestic failures. For every diplomatic victory there was a shocking gross domestic product figure, for every trade deal there was employment data pointing to defeat.

As for respecting the Constitution, Zuma continued what gives every appearance of being a concerted campaign to go down in history as the president who worked hardest at undermining the standing of that supreme law.

The evidence of that campaign was, if anything, more pronounced than during his first stint in office: his approach to the recommendations of the public protector, his Stalingrad strategy in legal challenges to his person and his office, his reaction to criticism and critique, his unwillingness to hold his Cabinet to account (and, on the contrary, promoting Tina Joemat-Pettersson to the crucial energy portfolio, despite the public protector’s findings against her) and his treatment of Parliament and the opposition in particular. Zuma has no excuses.

He started his new term with a firm popular mandate and vast resources at his command. He has squandered both, with declining public approval as the Nkandla saga dragged through Parliament and no sign of the economic growth that will be necessary to keep funding state expenditure without tax pain, come February.

Zuma’s most notable success in 2014 was in what did not happen: Lesotho did not descend into total chaos.

His personal push for Operation Phakisa and its focus on the ocean economy could yet prove a success, although it is too early to tell. And the major initiative his supporters point to – the progress to kick-start procurement of nuclear power stations – shows every sign of long-term disaster.

Though there is vast room for improvement, Zuma has never shown any inclination even to acknowledge his poor performance, so don’t hold your breath.

As last year, and the year before, Zuma gets an F.