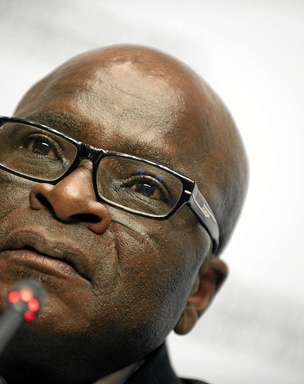 New Mineral Resources Minister Ngoako Ramatlhodi took the helm when the mining industry was in crisis. The platinum sector was locked in a stand-off between the emergent Association of Miners and Construction Union (Amcu) and platinum producers, with little hope of resolution in sight. Ramatlhodi almost immediately met labour and businesses to try resolve the strike.

Though some appreciated his assertiveness, critics viewed the move as an attempt to outshine his predecessor, Susan Shabangu, where she had failed. Others viewed it as a strategic mistake because he appeared powerless to effect real change in the negotiations.

Either way, he withdrew from the talks fairly quickly, saying he was not abandoning them but that enough work had been done to resolve the impasse between mining companies and Amcu. The strike continued for another two weeks before coming to an end.

Ramatlhodi’s personal interests in Anglo American Platinum through an empowerment vehicle raised questions of a conflict of interest, although the department swiftly issued reassurances that the minister was in the process of converting these interests into a blind trust.

He inherited the widely criticised Mineral and Petroleum Resources Development Amendment Bill that, under Shabangu’s watch, was forced through Parliament ahead of the elections in May.

Aside from the constitutional questions over how it galloped through due parliamentary processes, there remain concerns over the content of the Bill, including the provisions pertaining to the oil and gas sector.

Ramatlhodi gave initial indications that he was considering these complaints and asked the president to hold off signing the Bill into law.

Little, however, appears to have happened since then, prolonging the uncertainty that has plagued the mining industry in recent years.

There is concern that the delay may be used to change concessions won by the industry regarding developmental pricing for strategic minerals, as well as to introduce more aggressive empowerment targets.

It is this uncertainty – along with the tense labour relations environment – that is said to be behind several mining majors hiving off their South African businesses from their other operations while others ponder restructuring and asset sales.

How he deals with these pressures will be key to Ramatlhodi’s term.