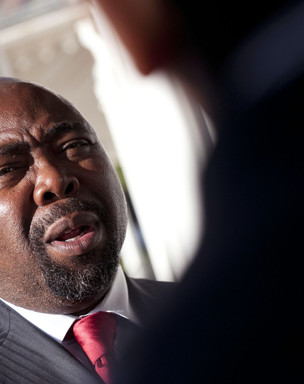 The core job of public works is to build, buy, own, secure, fix up and often rent buildings, properties and facilities for government. It is in effect a property company, which Thulas Nxesi says is seven times the size of property giant Growthpoint.

When Nxesi inherited the portfolio late in 2011, its outstanding features were widespread corruption, mismanagement and poor delivery.

Finances were a mess, signalled by consecutive adverse audit findings. Into this context fell two huge political scandals (among many others) predating Nxesi: a series of corrupt state leases and Nkandla. Both scandals were emblematic of the department’s condition.

Another serious problem that did not make headlines was the dire state of the government’s immovable assets register.

This meant the government owned thousands of properties but had little idea of what and where these were and how they were being used. A property company that does not know what it owns will fail. Nxesi began 2012 with a broom and a seven-year plan.

Nearly three years in, he appears to be making good progress. His department has physically verified 98% of the asset register, Nxesi says. Criminal and civil charges have been laid against key officials and businesspeople in various cases of alleged corruption.

Irregular expenditure continued in the 2013-2014 financial year, but this might be expected until management systems are strengthened and skill levels improved. Nxesi says he is working on this. Much more irregular expenditure was dug up this year from earlier years, and this is being investigated.

While the department’s property management branch received three audit qualifications for 2013-2014, it is a vast improvement from the regular and plentiful disclaimers from before Nxesi’s time. Previously, the Mail & Guardian marked Nxesi down for dragging his feet over the release of important information on Nkandla, which pointed to political expediency.

But to the limited extent that he has had influence over the affair this year, action has been taken against public works officials. That the politicians are left untouched has been out of his hands for some time.

Nxesi says it is too early to proclaim his turnaround plan a success, but he should be commended for his apparently consistent effort.