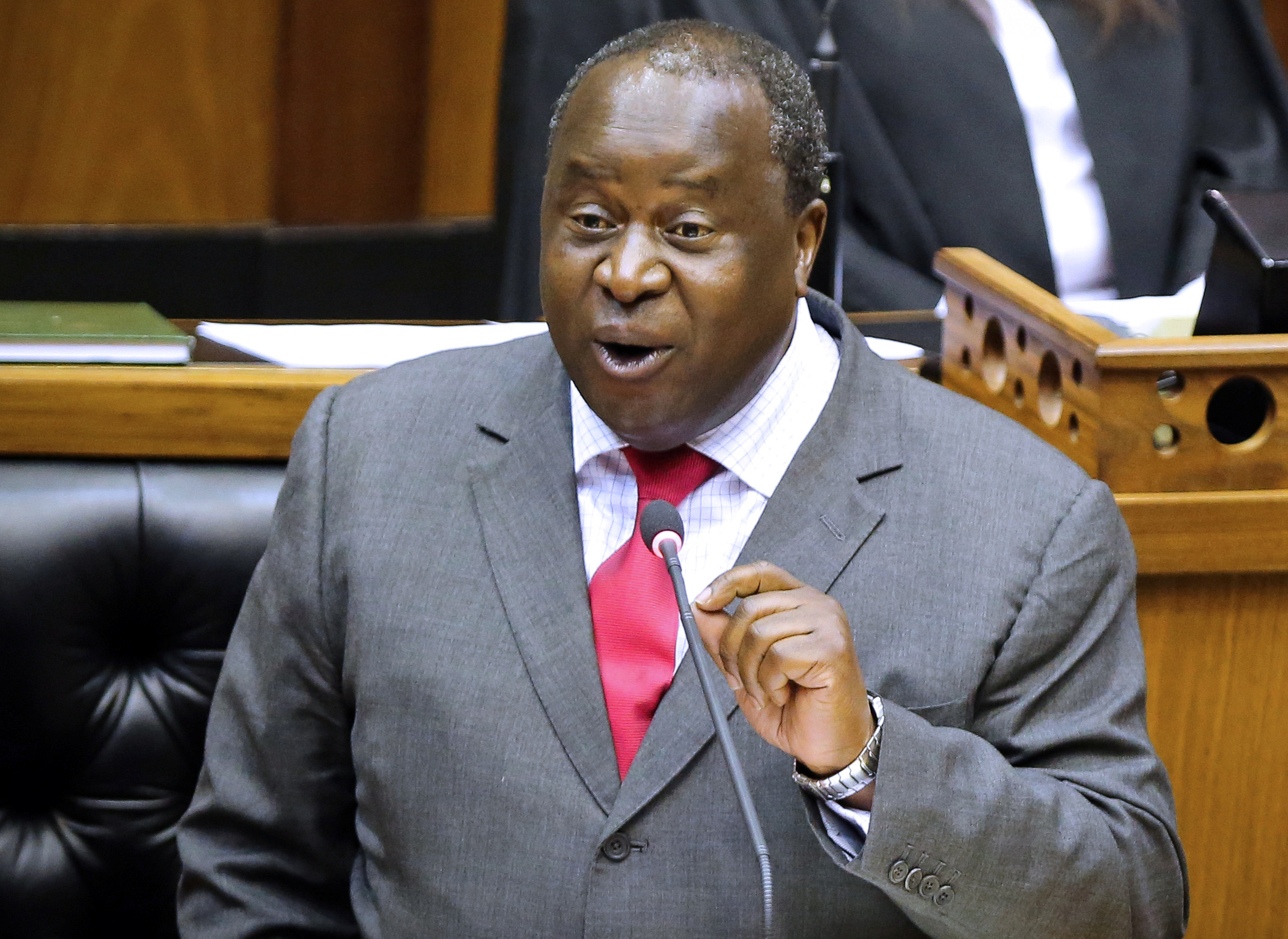 This time last year the finance minister was one Malusi Gigaba. A year later he is not even in Parliament and Tito Mboweni has the job. And there was another minister between the two, Nhlanhla Nene.

Such is the present turmoil in South African politics.

Gigaba, then a rising star, replaced Pravin Gordhan in March 2017, after Gordhan and his deputy, Mcebisi Jonas, were ignominiously recalled, first from a roadshow in London and then from their positions, by former president, now corruption-accused and in-the-dock Jacob Zuma.

Gigaba tabled a gnarly budget in February, when state capture was wreaking havoc on government’s finances. His critics say that as part-architect of the grand larceny, Gigaba inherited a problem of his own creation.

Cyril Ramaphosa had meanwhile taken the country’s top job after his narrow victory at the ANC’s elective conference in December.

Just days after the tabling of the budget Ramaphosa announced on February 27 that a new — well, recycled — finance minister in Nene would return to the position he had held until his axing by Zuma in December 2015 after refusing to sign off on a nuclear deal with Russia.

But Nene, who eschews the limelight, preferring to get on with the job quietly, quit before completing the year because he had said in a television interview that he had had no meetings with the infamous Guptas, whereas he had attended several such meetings.

Nene, apparently in the tradition of holding himself to the highest standards, quit in October shortly after telling the Zondo commission into state capture of the Gupta meetings, even though there was no suggestion of actual impropriety flowing from those meetings.

Re-enter Mboweni. He was minister of labour in Nelson Mandela’s Cabinet from 1994 and, for 10 years until 2009, governor of the Reserve Bank.

At the time of his appointment to the finance job he was a founding member of Mboweni Brothers Investment Holdings, an international adviser to Goldman Sachs International, Business Day reported. He resigned as chair of AngloGold Ashanti in 2014 and was removed as a nonexecutive director of the Brics New Development Bank after serving a two-year term in 2017, hinting on Facebook at the time that he had been fired, the Business Day report said.

Mboweni may have advised capitalism’s high priest, Goldman Sachs, but apparently also held leftist views, tweeting in April this year that “the state must own 40% of mining companies, start a state bank, implement appropriate land use planning, and create a sovereign wealth fund. That is radical economic transformation!!”

There is a Twitter handle for Nene, which is so inactive that it describes him as the finance minister and an ANC member of Parliament. As the finance minister, Gigaba was active on Twitter, but Mboweni’s tweets are something else. Trump-like, he picks fights outside his lane.

A tweet at 10.18pm on November 8 reads: “Wars start in different ways. Spears and shields, gun powder, bullets, and now through media: printed and electronic (eg trade wars by a super power President), and then Social media!! Well, the SA Editors must be Editors!! If needs be, we will be forced into the fight, WAR!”

And a minute later: “The problem is that there will be COLLATERAL DAMAGE!!”

After the South African National Editors Forum (Sanef) and Mboweni met on November 13, Sanef issued a statement reiterating its concerns about increased physical threats to journalists and the critical importance of government (and corporate) leaders protecting and strengthening constitutionally guaranteed freedoms.

“The minister shared the background context to his posts, which included a number of events where he felt his rights were seriously violated through unethical and reckless journalism,” said Sanef. “He acknowledged there were problems with the tone and severity of his tweets.”

Another Mboweni tweet, on December 4, read: “I find the violation of my homeboy’s @Julius_S_Malema family privacy distasteful, abhorrent, unjournalistic, backward and deserving the full condemnation by SANEF and all democrats.”

This followed the publication of the address of a luxury house in Hyde Park, Johannesburg, owned by cigarette manufacturer and smuggler Adriano Mazzotti, in which Malema and his family live. Malema later said his wife rents the property from Mazzotti.

Sanef, like Mboweni, objected to the posting of the address of the Malema house: the author of the story, Jacques Pauw, responded by removing it.

The curious thing about this tweet, which is seemingly in support of the leader of the opposition Economic Freedom Fighters (EFF), is that only a few weeks earlier Malema had led an attack on a Cabinet colleague, Gordhan, and his daughter. Malema described Gordhan, as “a dog of white monopoly capital”, alleged Gordhan was a prime enabler of state capture and called the evidence leader at the Zondo commission a “bastard”.

It is not as though Mboweni, a member of the national executive council of the ANC and finance minister, does not have a lot on his plate without involving himself in an issue that Sanef quickly resolved, and in an environment where reports have alleged that the EFF leadership has benefitted from financial flows from sources such as the looted VBS Mutual Bank and a cigarette industry seen to have benefitted under the destructive rule of Tom Moyane at the South African Revenue Service.

Ramaphosa has made impressive strides in pruning ministers and functionaries who have done damage, although in cases admittedly moving them to positions where they can do less damage rather than getting rid of them entirely. We have a new (acting) taxman, a new head of public prosecutions, new boards at the state-owned enterprises and we are seeing progress in getting back some of the billions looted under the Zuma kleptocracy.

But the damage has been so sustained and widespread, particularly in state-owned enterprises, that these enfant terribles continue to demand to be suckled at the state breast. Eskom is so large and teetering so far over the brink that it threatens not only to engulf us in blackouts but, because of the extensive guarantees it has from government, also to put the country into financial default.

These enterprises are in need of drastic surgery; among other things, by reducing staff to sustainable levels. But ahead of elections in mid-2019, government’s message appears to be that restructuring must take place without cutting staff. And, from treasury’s point of view, there should be no bailouts from an already maxed-out fiscus.

Mboweni breezed into office in October with a certain irreverence, throwing about ideas on the need for e-tolls, closing loss-making SAA and challenging the wisdom of a national minimum wage.

His e-toll comments ran into fierce headwinds from the Gauteng ANC; whatever your views about a minimum wage, the policy resulted from a protracted and exhaustive process that few would want to start afresh; and his comments on closing SAA were slapped down by the president and Gordhan.

Mboweni’s opposite number in the Democratic Alliance, David Maynier, writes in the Financial Mail that “the governor” may be ungovernable. “He may just be hard-wired to blow himself up from time to time, rather like Donald Trump, who apparently sits on his bed watching the news, eating cheeseburgers and posting the first thing that comes to his mind.”

Canvassing views on Mboweni, the perception that he is a loose cannon extends to senior levels in the ANC. Labour federation ally Cosatu wants him reined in. Most want him to be less Trumplike and to focus on building capacity in what was once a prime driver of the democratic project, the treasury.